The Safety Setup page allows you to configure the failsafe settings. 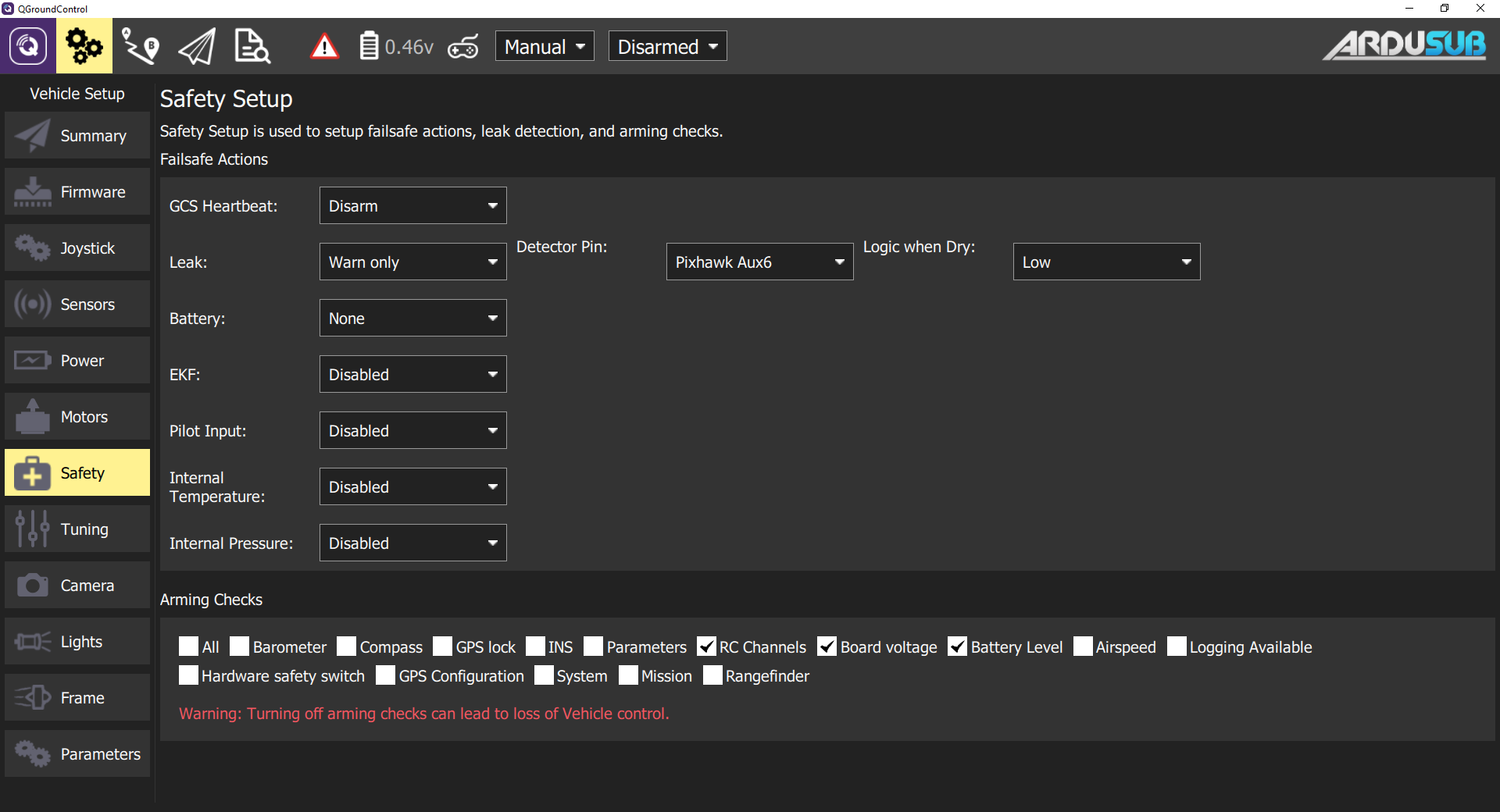 Individual failsafes are triggered when a certain set of conditions are met. Failsafe actions can be configured individually for each failsafe trigger. When a failsafe is triggered, the cooresponding failsafe action is executed. Some failsafes have additional settings that allow you to adjust the trigger conditions, such as maximum acceptable pressure or temperature.

Triggered when a HEARTBEAT from the ground control station matching SYSID_MYGCS hasn't been received for more than 2.5 seconds. The failsafe is cleared immediately when a HEARTBEAT is received.

Triggered immediately when a configured Leak Detector detects a leak. The failsafe is cleared if the leak detector reports no leaks for two seconds.

Triggered when the EKF compass or velocity variances exceed the threshold set by the FS_EKF_THRESH parameter.

Triggered when pilot manual control input has not been received since the amount of time specified by the FS_PILOT_TIMEOUT parameter.

The failsafe is disabled, and nothing (not even event logging) will happen.

A message will be sent to the ground control station indicating the failsafe conditions have been met. The warning is sent via STATUSTEXT messages, there is no mechanism to immediately re-send the message in the case that it was not received by the ground control station. The warning is sent repeatedly at 20~30 second intervals as long as the failsafe conditions are met.

These warnings are also sent if the failsafe action is set to anything other than Disabled.

This panel sets which Pre-ARM Safety Checks are enabled.

All of the arming checks are performed.

Fails if any of the Barometers detected at boot are unhealthy. bug

Fails if the on board compass is enabled and any of the following are true:

This feature requires an under water positioning system. A GPS antenna will not work under water.

Fails if the home position is unset and the GPS is not reporting a 3D fix.

Does nothing! Not Implemented.

Fails if the configured RC input ranges are invalid.

This feature is not supported on all boards

Fails if the battery failsafe is active, of if a battery voltage is below the threshold configured by the ARMING_MIN_VOLT or ARMING_MIN_VOLT2 parameters.

This setting does not apply to ArduSub. It should have no effect, and should be left at the default value. It will be removed in the future.

Fails if there is no SD card inserted or if writing a log failed.

Fails if any of the following is true: